Hundreds of petroglyphs, dating from pre-contact time and the Spanish colonial era, can be found along this mesa above the Santa Fe River. Most of the petroglyphs were placed there by Keresan-speaking puebloan people living in the area between the 13th and 17th centuries. The descendants of these people now live down the Santa Fe River along the Rio Grande at the Cochiti and Santo Domingo Pueblos. The area is known for the great number of hump-backed flute player images and a great variety of bird figures.


What do the petroglyphs mean? Some are obvious: a bighorn sheep with arrows in its side and a bunch of hunters running after it, for example, requires little explanation. Some pictures are interpreted by contemporary Native Americans, many of whom claim a common cultural heritage with the ancient petroglyph makers, as having spiritual or religious significance. But the fact is we don't have any idea what most of the pictures mean, and likely never will.
NIKON CORPORATION NIKON D810, f/8 @ 75 mm, 1/20, ISO 64, No Flash
Copyright 2015 Steve Carter 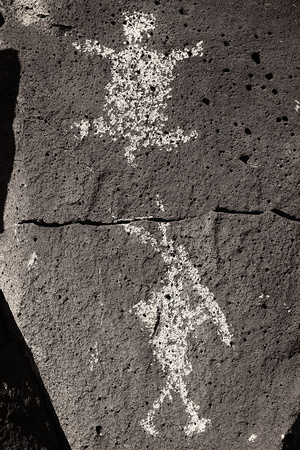