The Kokopelli symbol is represented in a number of guises depicting his role as a source of music making and dancing and spreading joy. The distinguishing features of the Kokopelli symbol are his hunchback, his dancing pose and his flute. The hunch on his back represented the sack he carried which might contain seeds for the harvest, the songs he carried and beautiful rainbows. Kokopelli is often depicted with a large phallus and wearing antlers or horns on his head. The flute he plays symbolizes his music that changes the winter to spring. There are many legends and myths about Kokopelli. He is believed to travel from village to village bringing the change of the season and bringing rain for a successful harvest.

Hundreds of petroglyphs, dating from pre-contact time and the Spanish colonial era, can be found along this mesa above the Santa Fe River at La Cieneguilla. Most of the petroglyphs were placed there by Keresan-speaking puebloan people living in the area between the 13th and 17th centuries. The descendants of these people now live down the Santa Fe River along the Rio Grande at the Cochiti and Santo Domingo Pueblos.
NIKON CORPORATION NIKON D810, f/8 @ 98 mm, 1/50, ISO 64, No Flash
Copyright 2015 Steve Carter 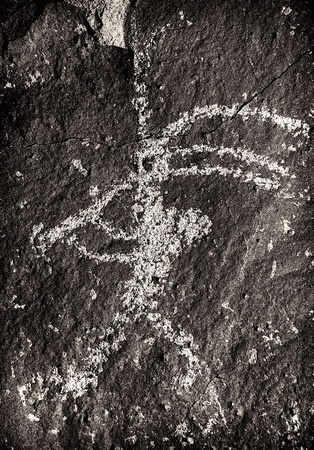